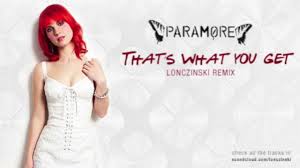 Song of the Day – That’s What You Get

Padmini, also known as Padmavati, was a legendary 13th-14th century Indian queen (Rani). The earliest source to mention her is Padmavat, an epic fictionalized poem written by Malik Muhammad Jayasi in 1540 CE. The text, which features elements of fantasy, describes her story as follows: Padmavati was an exceptionally beautiful princess of the Singhal kingdom (Sri Lanka). Ratan Sen, the Rajput ruler of Chittor, heard about her beauty from a talking parrot named Hiraman. After an adventurous quest, he won her hand in marriage and brought her to Chittor. Alauddin Khalji, the Sultan of Delhi also heard about her beauty, and laid siege to Chittor to obtain her. Many events occur during the period of the Siege, till the Fort is finally taken. Meanwhile, Ratan Sen was killed in a duel with Devpal, the king of Kumbhalner who was also enamoured with Padmavati’s beauty. Before Alauddin Khalji could capture Chittor, Padmavati and her companions committed Jauhar (self-immolation) to protect their honour. After her sacrifice, the Rajput men died fighting on the battlefield. Several subsequent adaptions of the legend characterised her as a Hindu Rajput queen, who defended her honour against a Muslim invader. Over years, she came to be seen as a historical figure, and appeared in several novels, plays, television serials and movies. However, while Alauddin Khalji’s siege of Chittor in 1303 CE is a historical event, the legend of Padmini has little historical evidence and most modern historians have rejected its authenticity.